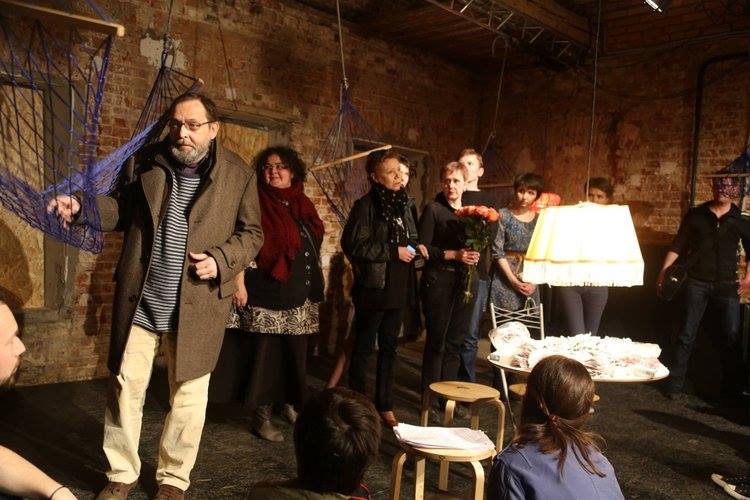 Reading of a new play about Mikhail Ugarov and Elena Gremina, the founders of Teatr.doc, who died tragically earlier this year. The play will be read by two members of the theatre, one of whom wrote the play based on the social media posts of Ugarov and Gremina.
Teatr.doc was founded in Moscow in 2002 by a group of writers to stage their own documentary-style writing. Teatr.doc emerged from a series of master-classes held in Moscow for Russian actors, directors and playwrights by London’s Royal Court Theatre (the principal school of verbatim theatre) in 1999-2000. Initially, Teatr.doc stuck to a single method: practically all its plays were created on the basis of long interviews with actual people. That is, the actors, director, and playwright were focused on preserving the speech of those who had lived through whatever event they were recreating.

At first, Teatr.doc’s playwrights and directors focused mainly on social issues such as the plight of prisoners, migrant workers, drug addicts and those suffering from HIV. John Freedman of the Moscow Times notes that from 2010 onwards, the plays became increasingly critical of the government. From this time onwards the theatre itself began to be actively persecuted.
Playwright, director and Teatr.doc founder Mikhail Ugarov died at the age of 62 in early April, 2018. In May this year, his wife and co-founder of Teatr.doc, Yelena Gremina, died at the age of 61 of kidney and heart failure.
Playwright Maxim Kurochkin and director Zarema Zaudinova are working on a performance based on the diaries of Ugarov and Gremina and their records in Live Journal and Facebook from 2005 to 2018. Zarema says, “this is a story about how the state was slowly killing two artists : it’s very obvious from their records, how these evictions, interrogations, accusations as well аs what was happening around, destroyed their lives.”
This play is a way to mark the tragic end of the founding era for Teatr.doc. Gremina and Ugarov changed Russian theatre; for tens of thousands of people all over the world, they were the theatre they created, in many ways it was a manifestation of their characters. The nurtured playwrights and actors, and bravely brought all the main events of their country to the stage as they happened. In the end, Zaudinova says, they paid for this with their lives.

This will be the first UK performance or reading of the play that will be premiered in Russia in September of this year. It will be performed by Zudinova and Maxim Kurochkin.

Zarema Zaudinova trained closely with Ugarov and Gremina over the last three years, while Maxim was with them from the beginning, and was one of the co-creators of Teatr.doc. He was Ugarov’s favourite playwright and a great friend to both him and Gremina.

Maksym Kurochkin,
Playwright, screenwriter, prose writer, historian.
Author of 14 plays.
Member of the committee of the Festival of Young Play Writing and the project “Documentary Theater”. Prizes: Laureate of the special jury prize “Antibooker” for his book- “For the search for new ways in drama” (1998).Widely recognized as one of the most imaginative playwrights in Moscow today, dubbed “the ideal playwright for the global age” by the Moscow Times.

Zarema Zaudinova:
Director, assistant artistic director, co-curator of the festival “Hunting for Reality”.
Graduated from the Marina Razbezhkina and Mikhail Ugarov School of Documentary Film Making and Theatre.
In the Teatr.doc, she staged the plays – “Studio Apartment in Izmaylovo” and “Associates” (“Bolotnaya 2”) and worked on several plays as an assistant director.
This is a joint event with Anglo-Russian Culture Club.

In Russian with English translation.
This event is part of Bloomsbury Festival 2018.
Tickets: £12/£10

Our guest from Canada, poet Vera Pavlova, is a classically trained pianist “in her first life”. A unique combination of Vera’s poetry and Tchaikovsky’s music, played by her. “As Vera Pavlova speaks, she uproots the traditional meanings and turns of speech, pronouncing each word with delight, but also with an effort, as if for the first time, carefully listening to the sound and feeling anew her native speech with her tongue…” Aleksandr Arkhangelskiy, “Vremia MN”… END_OF_DOCUMENT_TOKEN_TO_BE_REPLACED

A laureate of the prestigious Andrei Bely Prize, Rubinstein is an accomplished poet with a sharp eye for unusual detail. His innovative use of ‘found poetry’ and ‘poems on index cards’ were refreshing and unique in the surge of ‘new literature’ after the fall of Communism. He is also a keen essayist; his columns for publications such as Itogi, Esquire and grani.ru are extremely popular and his book of collected essays Zeitgeists, has earned well-deserved praise from critics and readers alike. … END_OF_DOCUMENT_TOKEN_TO_BE_REPLACED

Published in more than thirty languages, Fiona Sampson has twenty-one volumes of poetry, criticism and philosophy of language.  She works as an editor and critic. She is Professor of Poetry at the University of Roehampton, where she also edits the international quarterly Poem. Our club is proud to have Fiona as our patron. In her lecture Fiona address important questions such as: is poetry ever useful? Can it be therapeutic? Is it only relevant to individuals from some communities and not ot… END_OF_DOCUMENT_TOKEN_TO_BE_REPLACED

I had decided to wait a day or two before writing this post in order to calm myself and allow the experience to settle. Now here goes – On Thursday I attended an extremely disconcerting, startling and stunning piece of theatre at, of all places, The Royal Court.
I stepped out of Sloan Square Tube to be greeted by the unmistakable aroma of extreme wealth. So far, so London. I was completely unprepared for what I was about to witness. In the studio space/bar three Russian actors and a cel… END_OF_DOCUMENT_TOKEN_TO_BE_REPLACED