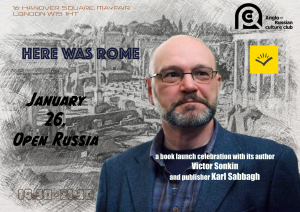 In 2012, Moscow’s Corpus Publishers has published “Here Was Rome”, Victor Sonkin’s literary and historic guidebook to Ancient Rome, the city which has been his passion since childhood. Next year, the book received the Enlightenment Award, the country’s most prestigious award for nonfiction. In 2015, Moscow-based publishing house “A Walk Through History” published his illustrated encyclopedia for children “We Live in Ancient Rome”.

In the summer of 2017, “Here Was Rome” was published by Skyscraper Books, London, in the author’s translation. Dr. Victor Sonkin is a scholar, translator and writer. He has studied Slavic literature and the structure of poetry, especially its verse patterns, and translated from Serbian into Russian the seminal monument of Russian versification studies by the outstanding Serbian-Russian-American scholar Kiril Taranovski. For several years, he worked as a Serbian-English translator at the International Tribunal for the Former Yugoslavia in The Hague. As a literary translator, he has worked on works of Patricia Duncker, Dan Rhodes, Nassim N. Taleb, Julian Barnes, and two novels of the American author Hanya Yanagihara — “A Little Life” (published in 2016 and having caused a torrent of both praise and indignation in Russia) and “The People in the Trees” (to be published later this year). Most of his translations into Russian are done together with his wife and longtime colleague Alexandra Borisenko; they also teach literary translation at Moscow State University and the new ‘outside the classroom’ organization Creative Writing School. He has also translated into English the book of Slava Kurilov, “Alone in the Ocean” — an outstanding memoir of escape from a cruise ship in the middle of the open sea.

In his talk, Victor Sonkin will invite the audience to join him on a walk along the streets and squares of Rome, where antiquity and later eras come together. We will visit the Protestant Cemetery of Rome (actually ‘non-Catholic’, where both English protestants, Russian Orthodox Christians and Italian atheists have been laid to rest); we will follow the steps of the Scottish architect Charles Cameron who could make a career in England, but chose to study ancient Rome and later design some of the most iconic structures of St. Petersburg; we will explore some classical-era legends which are well known in Russia but virtually unknown in Britain and vice versa — and discuss what to do with those things in a translation.

Our guest from Canada, poet Vera Pavlova, is a classically trained pianist “in her first life”. A unique combination of Vera’s poetry and Tchaikovsky’s music, played by her. “As Vera Pavlova speaks, she uproots the traditional meanings and turns of speech, pronouncing each word with delight, but also with an effort, as if for the first time, carefully listening to the sound and feeling anew her native speech with her tongue…” Aleksandr Arkhangelskiy, “Vremia MN”… END_OF_DOCUMENT_TOKEN_TO_BE_REPLACED