An evening with Tatiana and Elizabeth Steinberg. Rus\Eng available 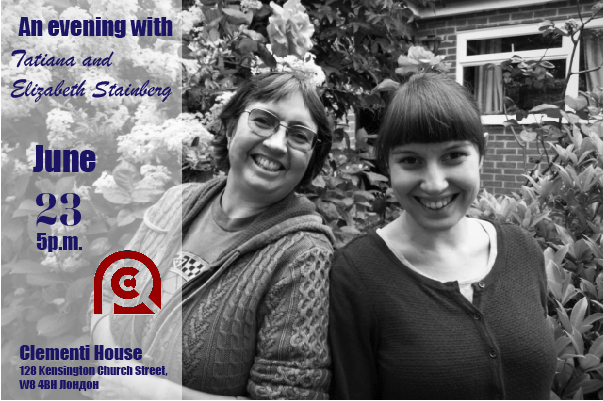 We moved to England as one big family, and later I would give birth to two more girls. In Moscow, before my degree I worked in my field of study (physiology; having graduated in the biology faculty in Moscow State University), but when we arrived in this new place, it somehow straight away ended up with my husband earning the money, and me looking after the children at home. This set-up was the best option for a long time, but there came a moment when I suddenly had to find a job very quickly. This happens when all the financial responsibility for the family rests with one person. If it’s all well-coordinated, this arrangement copes fairly well. While one of the parents works, the other helps arrange a happy, comfortable and well-organised home. And also constantly teaches the children Russian – so that they, you understand, could talk, read and write in Russian, despite living in the middle of Hampshire. Because it’s also then much easier for me to explain myself to them, and therefore somehow keep the family reins in my grasp. My own English was quite weak at the time.

And then there was an unpleasant change of scenery. And it became clear that I wouldn’t be able to keep sitting at home – time to earn some money. At the same time, I was nearing the fifty mark, my professional experience could be safely forgotten, and yet despite this I quickly sorted myself out and went to work as a carer. I worked as a carer for seven years.

This was a brave decision by a not-too-young mother whose English still leaves much to be desired. After all, my clients very often spoke not too clearly, could sometimes not hear very clearly either, understood things slowly, and generally could have all kinds of prejudices about being looked after by a foreigner. Which they often did.

On the other hand I had golden colleagues. They always supported and cheered me up.

As my experience rose and my skills improved, it seemed more and more to me that I knew very well how to improve the situation in this or that case. And I often tortured the people around me with my plans regarding such matters. Well, and often ended up in awkward situations at work – who doesn’t though? However sometimes I had the clear impression that I couldn’t properly communicate my thoughts – in their English language. So, if I had to write a letter, for example, I would ask my children to proofread it for me. During this time, out of my children the only one that ended up most often at home with me was my youngest daughter Liza. So it was her that got the constantly absent, overworked mother, who often fell head first either onto her plate, or into her book, (Russian of course) which she would remind herself to read to her child before bed. But at the same time would not so much as read, as mumble about something she was half-dreaming about.

Also, up until she was about thirteen, I would force her to sit down and do grammar exercises for Russian, and also read poetry and even sang a bit (for example, Okudzhava). By the way, I do not know how to sing, although I really like to.

The result of such an upbringing were some fairly early attempts by my daughter to translate poetry – quite successfully as far as I could tell. Although it’s still hard for me to properly appreciate them due to my still underdeveloped English.

The result of my work, apart from certificates for 2nd and 3rd levels in the Health and Care field, were my ‘memoirs’ – you can also call them ‘notes of the elderly carer’ (which sort of rhymes with a certain famous work).

By the way, about rhyming – I myself started writing my own poetry a long time ago; since I was young. Some of it was published, and the majority of them are now uploaded onto my website. In my ‘memoirs’ there are stories, poems, musings on certain topics, and also my photographs. Obviously there aren’t any people in them, although my stories are all genuine – with respect to people’s privacy of course. The majority of the stories’ personas are no longer alive.

During our evening I plan to read a little, and also talk with the audience, who I hope will have some questions.

Hello, good evening all, my name is Liza Steinberg. I was born and raised in England, but have spoken and read Russian from a young age. This is thanks, in most part, to our mother’s approach to the possibility of her children not knowing Russian being “over my dead body.”

I got interested in poetry also early on – mostly writing my own work, but after a while I decided to try to try and translate some of the Russian poems I knew.

When other kids got “twinkle, twinkle little star” I got Okudzhava’s “Raven” sung to me as a lullaby. So it’s no surprise that I started with Okudzhava and that “Raven” was one of the first poems, or songs, that I translated. Perhaps because I have an idealistic view on poetry translation, but even at the start it never occurred to me that a translation would not attempt to try and get the exact meaning, and perhaps also melody across in the English version. It was only later that I found out that not everybody is crazy enough to attempt this (with every poem).

Translator and publisher’s journey to the time of Revolution, a wonderful author’s reading of Boris from his new books! Stories and Poems from the Russian Revolution ‘One of the real gems among the centenary books… Boris Dralyuk assembles a potent blend of novelty, utopianism and eschatology’ — Spectator ‘Broad and erudite collection’ — Financial Times ‘Dralyuk has assembled a high-pressure book of crisis writings by authors caught strutting as actors on the world stage’ –Times Liter… END_OF_DOCUMENT_TOKEN_TO_BE_REPLACED