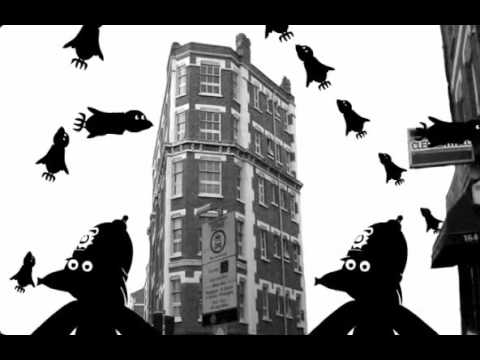 Screening and talk with composer, producer and co-author of many Alex Budovsky’s films Stephen Coates.

Born in St-Petersburg, Russia on January 21st, 1975.Moved to New York in 1994.In 2000 graduated from Brooklyn College, (bachelor of Arts) with emphasis on film.
2002 – present: Animator, producer, scriptwriter and director of award winning animated music videos, educational animations for children, independent shorts and commercial ads. From 2010 to 2019 directed episodes of several animated TV series for major Russian animation studios in Moscow and St-Petersburg, such as Aeroplan, Melnitsa, Metronom and Animacord. Independent short films received awards on many festivals around the world, including Sundance, Tribeca, Florida Film Festival and so on.
In 2010 moved to Bogota, Colombia.

Stephen Coates is a music producer and broadcaster and runs Antique Beat – a London based
arts label. He has released many recordings and toured internationally as The Real Tuesday Weld since 2000.
His music has been used extensively in film, television, commercials, radio and arts projects.

He is closely connected with the London arts world. He was commissioned to write music for
the Rothko room at the Tate Modern, re-scored the surrealist cult film ‘Dreams That Money
Can Buy’ for the British Film Institute and composed the ‘Propaganda for the State of Love’
installation for the ‘Cold War Modern’ exhibition at the Victoria and Albert Museum.

Since 2003, Stephen has been performing in Russia and working on various Russian music related projects.
His work with long term collaborator, the animator Alex Budovsky has received many international awards.
Over the last four years, Antique Beat have published the film music of Mikael Tariverdiev in the West for the first time

In 2013, he launched the ‘The X-Ray Audio Project’ to provide a resource of information about the Soviet bootleg recordings of forbidden
music made on used X-Rays in the 1940s and 1950s. It has received a significant amount of international media interest and has evolved into live events, an international traveling exhibition, an award winning documentary and a book.

Stephen has delivered talks on the project at various international venues including TED in Krakow.
He regularly appears on radio as the presenter and writer of programs for the BBC, Resonance and Soho Radio

In 1968 Garri Bardin graduated from the Moscow Art Theater School-Studio, the course of P.V. Massalsky. Worked as a dramatic actor in the theater of Gogol, was shot in the movies. In 1974, together with V. Livanov wrote a play “Don Juan”, and was invited by Sergei Obraztsov as a director in the Moscow Puppet Theater. In 1975 he began to work as a director-animator at the Soyuzmultfilm studio, where for 15 years he made 15 films marked by numerous prizes both at home and abroad. In his luggage Bardin had four “Nika”, “Golden Palm Branch” of the Cannes Film Festival and a host of other prestigious prizes collected by his films around the world. Garri Bardin has won recognition and success, using in his films a variety of techniques and materials: these are the matches in the “Conflict”, and the ropes in the “Brace”, and the wire in “Freaks,” and origami in one of the latest films – “Adagio.” In addition, the author uses both traditional dolls and clay. Almost in all of his films, Garri Bardin is the author of the scripts. In 1991, together with his group, Bardin founded his own studio “Stayer”, where he still works.