Teatr.Doc – a theatre where nobody acts 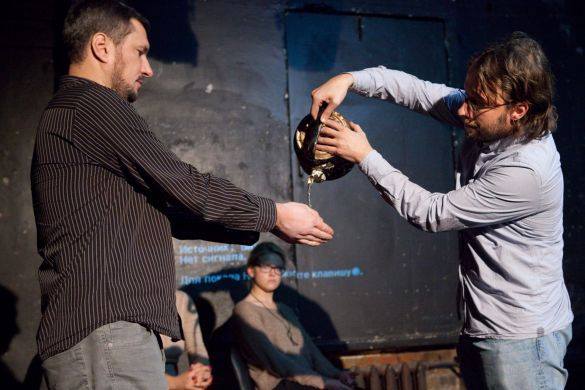 A special event with leading critic of Russian theatre, John Freedman, on a rare visit to the UK, with teatr.doc’s Zarema Zaudinova. A talk about the history and activity of teatr.doc, Russia’s first centre of documentary theatre, including video excerpts from their most important performances and background on its history and the intimidation it has received over the years.

Over the 16 years of its existence, the avant-garde Teatr.doc has metamorphosed into a cultural phenomenon. It is the birthplace of national documentary theatre the verbatim tradition. It was also here where the careers of many stars of the Russian contemporary theatre (such as Ivan Vyrypaev, Kirill Serebrennikov and Viktor Ryzhakov) began.

The most important thing for Teatr.doc is man: his dignity and the problems of his existence.

Due to its political views the theatre has experienced harassment and disruptions of performances by the authorities, with police raids forcing staff to evacuate the audience mid-performance. The theatre has had to change venues several times since 2014.

In the spring of this year, the founders and leaders of Teatr.doc, Mikhail Ugarov and Elena Gremina, both died. However, this didn’t stop the work of Teatr.doc.

During this event Zarema Zaudinova and John Freedman will be showing video excerpts from the most significant performances of Teatr.doc, such as:

“September.doc”. A play about the terrorist attack in Beslan;

“Hour 18” . About the death of Sergei Magnitsky;

“Two in your house”;

All of these plays showcase the fearlessness of Teatr.doc – a theatre which will not succumb to intimidation.

In English with some Russian. This is a joint event with the Anglo-Russian Culture Club.

Graduated from the Marina Razbezhkina and Mikhail Ugarov School of Documentary Film Making and Theatre.

In the Teatr.doc, she staged the plays – “Studio Apartment in Izmaylovo” and “Associates” (“Bolotnaya 2”) and worked on several plays as an assistant director.

American writer, translator and former theatre critic who has lived in Moscow since 1988. His play Dancing, Not Dead won the new play competition conducted by The Internationalists in 2011, and was performed in various languages in Romania, Germany, Russia and the United States. His short play Five Funny Tales from Buenos Aires has been performed frequently in the U.S. and the U.K. With Jennifer Johnson he co-authored Double Edge Theatre’s production of The Firebird in 2010. He has published and/or edited 12 English-language books about Russian theatre, and was the theatre critic of The Moscow Times English-language daily newspaper from 1992 to 2015.

A thrilling lecture not just about Dorothy Saier’s novel, but about female education in Oxford — where the events of “Gaudy Night” take place. Dr. Alexandra Borisenko talks about the role of women in Oxford University in 19th century, as well as her experience of researching the environment of the novel and translating it into Russian, including the need to plunge into the university life of the last century and to deal with hundreds of quotes,  from the Bible to popular poetry, that “Gaudy N… END_OF_DOCUMENT_TOKEN_TO_BE_REPLACED

Published in more than thirty languages, Fiona Sampson has twenty-one volumes of poetry, criticism and philosophy of language.  She works as an editor and critic. She is Professor of Poetry at the University of Roehampton, where she also edits the international quarterly Poem. Our club is proud to have Fiona as our patron. In her lecture Fiona address important questions such as: is poetry ever useful? Can it be therapeutic? Is it only relevant to individuals from some communities and not ot… END_OF_DOCUMENT_TOKEN_TO_BE_REPLACED