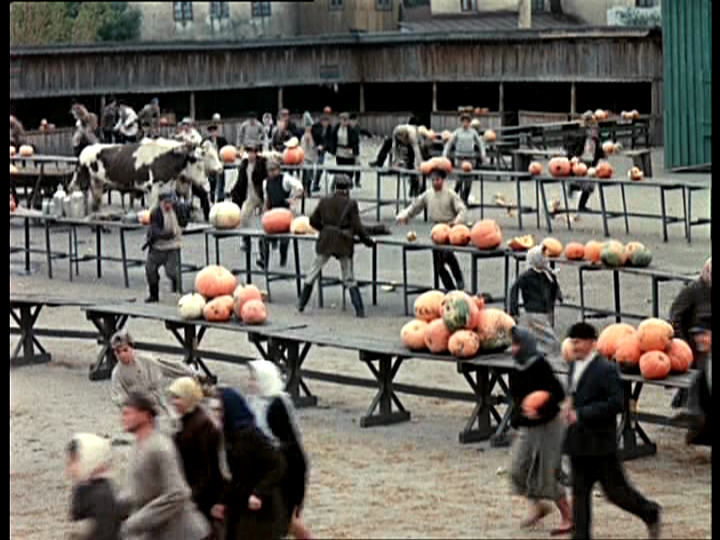 “The peasant is on a farm. The worker is in the industry,
and the bourgeois bloodsucker is on the Black Sea.”

Shine, Shine, My Star (Gori, Gori, Moya Zvezda), a 1969 film from director Alexander Mitta, is a gem of Soviet cinema which examines the role of Art in society and asks whether or not an Artist can perform and create without political consequences.

A complex, subtle and highly symbolic film, Shine, Shine, My Star presents the story of a young, nimble actor, Iskremas (Oleg Tabokov), an artist who wants to bring “The Art of Revolution to the Masses.” This he intends to accomplish by driving into the countryside and offering free theatre performances to the People.

The film begins with an explanation that it’s 1920, and that the story is set in the village of Krapivnitsky. The village is basically Red, but as the story plays out, it’s under frequent assault by bandits and also a White detachment passes through on the way to join Wrangel in the Crimea. Iskremas arrives in the village of Krapivnitsky with his “People’s Experimental Theatre,” and he’s full of enthusiasm which is conveyed through his energetic performances and speeches to the villagers. He takes a young girl, a now unemployed Polish servant named Krysya (Elena Proklova) under his wing, and together they plan to put on the play Joan of Arc: 500 years ago, the bourgeois and the money bags sent to the stake the beautiful Jeanne. Jeanne from Arc.

The villagers, however, appear much more interested in the salacious silent film powered by Pashka, a man who ad-libs the narration and alters the content depending on the audience. Trouble arises for the villagers when the Whites arrive…

Tickets are not available as this event has passed.

Published in more than thirty languages, Fiona Sampson has twenty-one volumes of poetry, criticism and philosophy of language.  She works as an editor and critic. She is Professor of Poetry at the University of Roehampton, where she also edits the international quarterly Poem. Our club is proud to have Fiona as our patron. In her lecture Fiona address important questions such as: is poetry ever useful? Can it be therapeutic? Is it only relevant to individuals from some communities and not ot… END_OF_DOCUMENT_TOKEN_TO_BE_REPLACED

Alexei Gherman’s first two solo features, 1971’s Trial on the Road and 1976’s Twenty Days Without War, both remarkable, unorthodox, and decidedly anti-heroic war films, met with official disapproval and censorship. The former was still banned (and would remain so for another decade) when Gherman embarked on the latter. A subtle, intimate, and affecting drama, Twenty Days Without War was denounced as “the shame of Lenfim” (it was made for Lenfilm Studios) and, for a time, itself suppres… END_OF_DOCUMENT_TOKEN_TO_BE_REPLACED

Our guest from Canada, poet Vera Pavlova, is a classically trained pianist “in her first life”. A unique combination of Vera’s poetry and Tchaikovsky’s music, played by her. “As Vera Pavlova speaks, she uproots the traditional meanings and turns of speech, pronouncing each word with delight, but also with an effort, as if for the first time, carefully listening to the sound and feeling anew her native speech with her tongue…” Aleksandr Arkhangelskiy, “Vremia MN”… END_OF_DOCUMENT_TOKEN_TO_BE_REPLACED