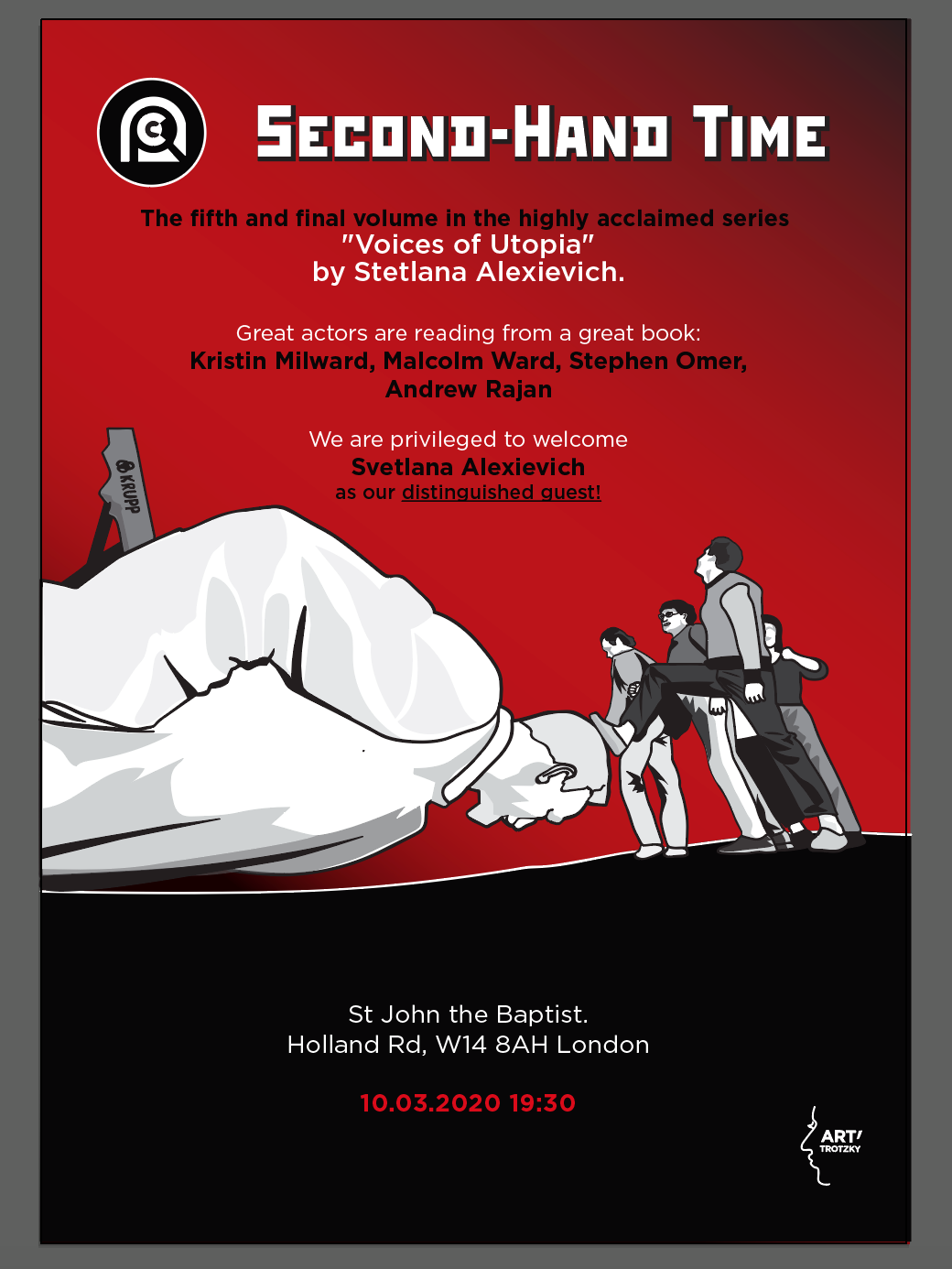 Great actors are reading from a great book:
Kristin Milward, Malcolm Ward, Stephen Omer, Andrew Rajan
We are privileged to welcome Svetlana Alexievich as our distinguished guest!
Svetlana Alexievich is visiting London by the invitation of Raw in War (Reaching All Women in War), an organisation that brings together international women of courage who stand for human rights and justice in war and conflict zones around the world.
About the event:
Six months after her widely successful speaking tour in London 2015 Nobel Prize for Literature winner and recipient of 2019 Anna Politkovskaya Price Svetlana Alexievich will be special guest at a rehearsed readings of her work.
The readings will be of “Second-Hand Time”, which is the fifth and final volume in the highly acclaimed series “Voices of Utopia” (one book in this series was used as the basis for the recent TV dramatization “Chernobyl”) .
In “ Second-Hand Time” Alexievich weaves together dozens of voices from the former-Soviet Union, including Gulag survivors, ex-Communist Party officials and others , whose fates are bound up with the tragedies of the last century and the upheavals of this one. This companionate and uniquely multidimensional work of history dares to represent both sides, involved in the tragedy of the soviet collapse.
Second-Hand Time has the broad sweep and moral depth of Greek drama. It’s history written ‘from below,’ as one critic put it. Svetlana Alexievich listens with a probing ear to what the ordinary citizens of Russia are feeling, saying and suffering.

A laureate of the prestigious Andrei Bely Prize, Rubinstein is an accomplished poet with a sharp eye for unusual detail. His innovative use of ‘found poetry’ and ‘poems on index cards’ were refreshing and unique in the surge of ‘new literature’ after the fall of Communism. He is also a keen essayist; his columns for publications such as Itogi, Esquire and grani.ru are extremely popular and his book of collected essays Zeitgeists, has earned well-deserved praise from critics and readers alike. … END_OF_DOCUMENT_TOKEN_TO_BE_REPLACED

I had decided to wait a day or two before writing this post in order to calm myself and allow the experience to settle. Now here goes – On Thursday I attended an extremely disconcerting, startling and stunning piece of theatre at, of all places, The Royal Court.
I stepped out of Sloan Square Tube to be greeted by the unmistakable aroma of extreme wealth. So far, so London. I was completely unprepared for what I was about to witness. In the studio space/bar three Russian actors and a cel… END_OF_DOCUMENT_TOKEN_TO_BE_REPLACED

Alexei Gherman’s first two solo features, 1971’s Trial on the Road and 1976’s Twenty Days Without War, both remarkable, unorthodox, and decidedly anti-heroic war films, met with official disapproval and censorship. The former was still banned (and would remain so for another decade) when Gherman embarked on the latter. A subtle, intimate, and affecting drama, Twenty Days Without War was denounced as “the shame of Lenfim” (it was made for Lenfilm Studios) and, for a time, itself suppres… END_OF_DOCUMENT_TOKEN_TO_BE_REPLACED