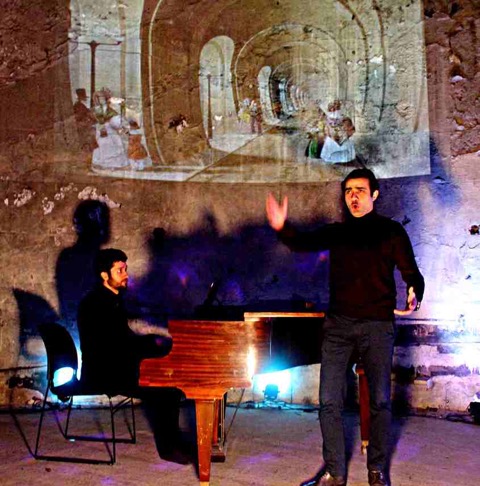 Rachmaninov – All the gipsy camp is sleeping from Aleko his first  opera. Danchenko’s libretto is an adaptation of The Gypsies by Alexander Pushkin and first performed in Moscow 1892. A story of love, hate revenge and abandonment.
Tchaikovsky – I bless you, Forests
Setting of a poem by Aleksey Konstantinovich TolstoyRachmaninoff- Sing not to me, beautiful maiden
Poem by Pushkin
Mussorgsky – Song of the flea
Sviridov –  Weathercock from Peterburg, a Vocal poem
“Petersburg, a vocal poem” composed for a great singer Hvorostovsky by the distinguished Russian composer Georgi Sviridov (1915-1998), texts, by 20th century poet Alexandr Blok.
Songs by Babajanyan
Rachmaninov – Preludes from op. 23 & 32
Considered to be among Rachmaninov’s best works for solo piano.
Monthly concert in partnership with the Anglo Russian Culture Club. Buy tickets here: £20 plus

Published in more than thirty languages, Fiona Sampson has twenty-one volumes of poetry, criticism and philosophy of language.  She works as an editor and critic. She is Professor of Poetry at the University of Roehampton, where she also edits the international quarterly Poem. Our club is proud to have Fiona as our patron. In her lecture Fiona address important questions such as: is poetry ever useful? Can it be therapeutic? Is it only relevant to individuals from some communities and not ot… END_OF_DOCUMENT_TOKEN_TO_BE_REPLACED

Alexei Gherman’s first two solo features, 1971’s Trial on the Road and 1976’s Twenty Days Without War, both remarkable, unorthodox, and decidedly anti-heroic war films, met with official disapproval and censorship. The former was still banned (and would remain so for another decade) when Gherman embarked on the latter. A subtle, intimate, and affecting drama, Twenty Days Without War was denounced as “the shame of Lenfim” (it was made for Lenfilm Studios) and, for a time, itself suppres… END_OF_DOCUMENT_TOKEN_TO_BE_REPLACED

Our guest from Canada, poet Vera Pavlova, is a classically trained pianist “in her first life”. A unique combination of Vera’s poetry and Tchaikovsky’s music, played by her. “As Vera Pavlova speaks, she uproots the traditional meanings and turns of speech, pronouncing each word with delight, but also with an effort, as if for the first time, carefully listening to the sound and feeling anew her native speech with her tongue…” Aleksandr Arkhangelskiy, “Vremia MN”… END_OF_DOCUMENT_TOKEN_TO_BE_REPLACED