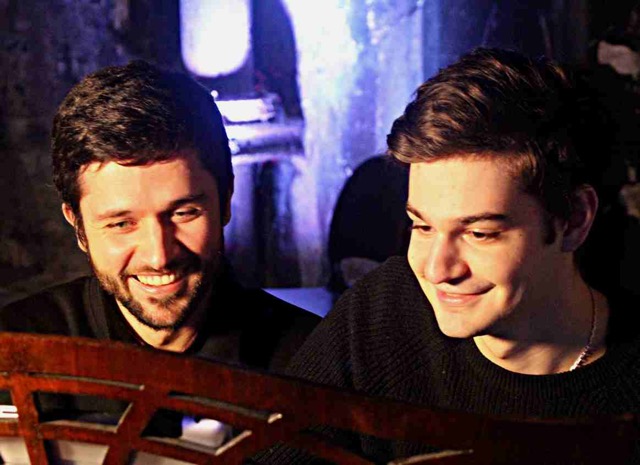 Ludwig van Beethoven’s Piano Sonata No. 8 in C minor, Op. 13, commonly known as Sonata Pathétique, was written in 1798 when the composer was 27 years old, and was published in 1799. It has remained one of his most celebrated compositions. Beethoven dedicated the work to his friend Prince Karl von Lichnowsky. Although commonly thought to be one of the few works to be named by the composer himself, it was actually named Grande sonate pathétique (to Beethoven’s liking) by the publisher, who was impressed by the sonata’s tragic sonorities.

Prominent musicologists debate whether or not the Pathétique may have been inspired by Mozart’s piano sonata K. 457, since both compositions are in C minor and have three very similar movements. The second movement, “Adagio cantabile”, especially, makes use of a theme remarkably similar to that of the spacious second movement of Mozart’s sonata. However, Beethoven’s sonata uses a unique motif line throughout, a major difference from Haydn or Mozart’s creation.

The Pathétique was an important success for Beethoven, selling well and helping to create his reputation as a composer, not just an extraordinary pianist. Not only was it immediately popular, it also exposed the world to the characteristics that Beethoven’s music would continue to develop in the coming years.

When the pianist and composer Ignaz Moscheles discovered the work in 1804, he was ten years old; unable to afford to buy the music, he copied it out from a library copy. His music teacher, on being told about his discovery, “warned me against playing or studying eccentric productions before I had developed a style based on more respectable models. Without paying heed to his instructions, however, I laid Beethoven’s works on the piano, in the order of their appearance, and found in them such consolation and pleasure as no other composer ever vouchsafed me.”

Anton Schindler, a musician who was a friend of Beethoven in the composer’s later years, wrote: “What the Sonate Pathétique was in the hands of Beethoven (although he left something to be desired as regards clean playing) was something that one had to have heard, and heard again, in order to be quite certain that it was the same already well-known work. Above all, every single thing became, in his hands, a new creation, wherein his always legato playing, one of the particular characteristics of his execution, formed an important part.”

Chopin’s Études formed the foundation for what was then a revolutionary playing style for the piano. They are some of the most challenging and evocative pieces of all the works in concert piano repertoire.

Opus 10, the first group of twelve, were published in 1833, in France, Germany, and England. The first set of Études was published in 1833 (although some had been written as early as 1829).

Chopin was twenty-three years old and already famous as a composer and pianist in the salons of Paris, where he made the acquaintance of Franz Liszt. Subsequently, Chopin dedicated the entire opus to him – “à mon ami Franz Liszt” (to my friend, Franz Liszt).

Although sets of exercises for piano had been common from the end of the 18th century (Muzio Clementi, J. B. Cramer, Ignaz Moscheles, and Carl Czerny were composers of the most significant), Chopin’s not only presented an entirely new set of technical challenges, but were the first to become a regular part of the concert repertoire. His études combine musical substance and technical challenge to form a complete artistic form. They are often held in high regard as the product of mastery of combining the two. His effect on contemporaries such as Franz Liszt was apparent, based on the revision Liszt made to his series of concert études after meeting Chopin. Contemporary Polish musicologist Tadeusz A. Zielinski wrote, on opus 10, that “not only did they become an orderly demonstration of a new piano style and the formulas peculiar to it, but also an artistic ennoblement of this style.”

Chopin’s Études are not without modern influence as well. Several of his etudes have lodged themselves in popular music, movies, or television shows.

Sergei Prokofiev’s Piano Sonata No. 7 Op. 83 (1942) (occasionally called the “Stalingrad”) is a sonata composed for solo piano, the second of the three “War Sonatas”

1. Allegro inquieto
The Allegro inquieto pays homage to and mocks the classical sonata form. As the tempo suggests, the tempo and rhythms are very nervous and suspenseful. The opening theme is mocking and harsh, and features many loud cluster-like chords. The second theme is a slow, thoughtful theme that seems to wander both through various keys and harmonies, and motifs. This long section begins to slowly pick up and results in the tumultuous, extremely chromatic and violent development. After reprising a portion of the slow section, a final quick, mocking fragment of the main theme is presented which ends in the only full statement of the key of the piece with a quiet, quick roll of the B♭ major chord.

2. Andante caloroso
The slow section is initially very beautiful, but seeping with sentimental emotion. Jaffé has pointed out that the opening theme is based on Robert Schumann’s Lied, ‘Wehmut’ (‘Sadness’, which appears in Schumann’s Liederkreis, Op. 39): the words to this translate “I can sometimes sing as if I were glad, yet secretly tears well and so free my heart. Nightingales… sing their song of longing from their dungeon’s depth… everyone delights, yet no one feels the pain, the deep sorrow in the song.” This opening theme quickly decays into an extremely chromatic section which sifts through various tonal centers, none of which seem familiar to the E that began the piece. After a clangorous, bell-like climax, the music slows and melts into the lush opening theme once more.

3. Precipitato
The Precipitato finale, once described as “an explosive burst of rock ‘n’ roll with a chromatic edge”, is a toccata which boldly affirms the key of the sonata through a more diatonic harmonic language than found in the first movement. This is obvious from the very beginning, with simple B♭ major triads repeated over and over again. Despite a wide range of performance tempos chosen by different pianists, the effect is nevertheless imposing and exciting. The toccata culminates into a furious recapitulation of the main theme, taxing all ten fingers to the utmost, until the piece finally ends triumphantly in a thundering cascade of octaves. The precipitato of this sonata is regarded as technically highly demanding.

On 20 June 1939 Prokofiev’s close friend and professional associate, the director Vsevolod Meyerhold, was arrested by the NKVD (Stalin’s Secret Police) just before he was due to rehearse Prokofiev’s new opera Semyon Kotko; he was shot on 2 February 1940.

Although his death was not publicly acknowledged, let alone widely known about until after Stalin’s reign, the brutal murder of Meyerhold’s wife, Zinaida Raikh, less than a month after his arrest was a notorious event. Only months afterwards, Prokofiev was ‘invited’ to compose здравица (literally translated ‘Cheers!’, but more often given the English title Hail to Stalin) (Op. 85) to celebrate Joseph Stalin’s 60th birthday.

Later that year, Prokofiev started composing his Piano Sonatas Nos 6, 7, and 8, Opp. 82–84, widely known today as the “War Sonatas.” These sonatas contain some of Prokofiev’s most dissonant music for the piano. Biographer Daniel Jaffé has argued that Prokofiev, “having forced himself to compose a cheerful evocation of the nirvana Stalin wanted everyone to believe he had created” (i.e. in Zdravitsa) then subsequently, in these three sonatas, “expressed his true feelings”. It was therefore ironic (most especially given the musical allusion identified by Jaffé in the central movement: see below) that Sonata No. 7 received a Stalin Prize (Second Class).

The first time the sonata was played was in Moscow on January 18, 1943 by Sviatoslav Richter, a Russian pianist, one of the finest pianists of the 20th century.

I had decided to wait a day or two before writing this post in order to calm myself and allow the experience to settle. Now here goes – On Thursday I attended an extremely disconcerting, startling and stunning piece of theatre at, of all places, The Royal Court.
I stepped out of Sloan Square Tube to be greeted by the unmistakable aroma of extreme wealth. So far, so London. I was completely unprepared for what I was about to witness. In the studio space/bar three Russian actors and a cel… END_OF_DOCUMENT_TOKEN_TO_BE_REPLACED

A laureate of the prestigious Andrei Bely Prize, Rubinstein is an accomplished poet with a sharp eye for unusual detail. His innovative use of ‘found poetry’ and ‘poems on index cards’ were refreshing and unique in the surge of ‘new literature’ after the fall of Communism. He is also a keen essayist; his columns for publications such as Itogi, Esquire and grani.ru are extremely popular and his book of collected essays Zeitgeists, has earned well-deserved praise from critics and readers alike. … END_OF_DOCUMENT_TOKEN_TO_BE_REPLACED