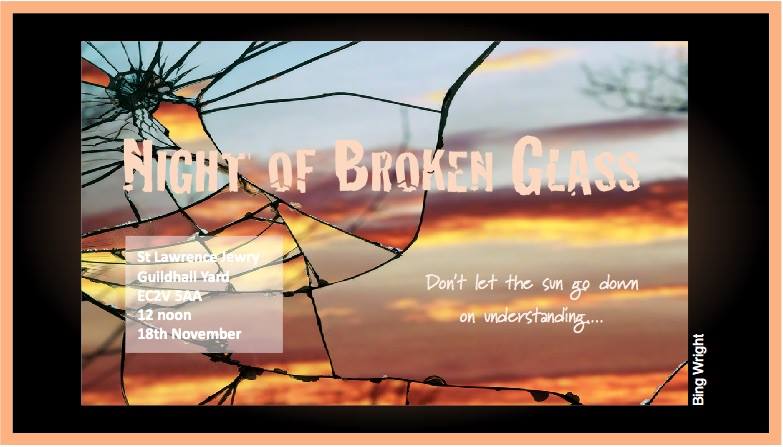 Come join us at noon on Sunday 18th November, in St Lawrence Jewry Church, Guildhall Yard EC2V 5AA, for Night of Broken Glass. This is a remarkable simultaneous event in London and Melbourne (Australia) to commemorate the 80th anniversary of Kristallnacht and promote understanding of different cultures, faiths and generations across the world.

Earlier in Melbourne, choirs of young people plus dancers and singers from Tunisia, India, Bhutan and Ghana and dance troupe Brothers in Arms come together to tell the remarkable story of Australian indigenous human rights activist, William Cooper, and his brave, lone protest against Kristallnacht. The event will interweave the stories of Jewish survivor of Kristallnacht in Munich, Kurt Wildberg; the son of the ‘Tattooist of Auschwitz’, Gary Sokolov; and the grandson of William Cooper, Uncle Alf Turner, (Uncle Boydie).

At noon, London time, we link with Melbourne for a live featuring Shostakovich’s once banned Jewish song cycle • ravishing music by Khiyo from the upcoming film Rising Silence about the Birangona women of Bangladesh • the premier of Lewis Murphy and John Farndon’s Chorus for Lost Voices • and much more.

Translator and publisher’s journey to the time of Revolution, a wonderful author’s reading of Boris from his new books! Stories and Poems from the Russian Revolution ‘One of the real gems among the centenary books… Boris Dralyuk assembles a potent blend of novelty, utopianism and eschatology’ — Spectator ‘Broad and erudite collection’ — Financial Times ‘Dralyuk has assembled a high-pressure book of crisis writings by authors caught strutting as actors on the world stage’ –Times Liter… END_OF_DOCUMENT_TOKEN_TO_BE_REPLACED