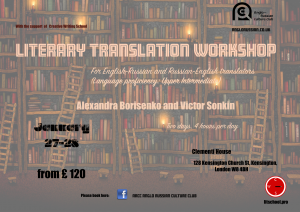 The first volume was dedicated to British and American stories of the Sherlock Holmes time (“Not Just Holmes”, 2009); the second concentrated on British crime stories between the world wars (“Not the Butler!” 2011); a collection of American crime stories of the mid-20th century will be published later this year.

Working jointly and separately, Borisenko and Sonkin have translated some of the Mary Poppins books by Pamela Travers, G.K. Chesterton’s stories, the books of Eva Hoffman, Patricia Duncker, Julian Barnes, Hanya Yanagihara and other authors.

Jointly with their former pupils, they have prepared the translations of “The Black Swan” by N.N. Taleb and four volumes of Dorothy L. Sayers’s novels with detailed comments. Their former students have translated in recent years some major works of contemporary English-language fiction, from Jonathan Franzen to Donna Tartt.

Alexandra Borisenko, Ph.D., is associate professor of Moscow State University specializing in translation theory and British literature and culture of the 19th and 20th centuries. Victor Sonkin, Ph.D., is the author of the historical guidebook “Here Was Rome”, which was awarded the prestigious Enlightenment Prize in 2013 and came out in the UK in English self-translation in 2017. Both Borisenko and Sonkin also work as simultaneous translators.

A laureate of the prestigious Andrei Bely Prize, Rubinstein is an accomplished poet with a sharp eye for unusual detail. His innovative use of ‘found poetry’ and ‘poems on index cards’ were refreshing and unique in the surge of ‘new literature’ after the fall of Communism. He is also a keen essayist; his columns for publications such as Itogi, Esquire and grani.ru are extremely popular and his book of collected essays Zeitgeists, has earned well-deserved praise from critics and readers alike. … END_OF_DOCUMENT_TOKEN_TO_BE_REPLACED

A thrilling lecture not just about Dorothy Saier’s novel, but about female education in Oxford — where the events of “Gaudy Night” take place. Dr. Alexandra Borisenko talks about the role of women in Oxford University in 19th century, as well as her experience of researching the environment of the novel and translating it into Russian, including the need to plunge into the university life of the last century and to deal with hundreds of quotes,  from the Bible to popular poetry, that “Gaudy N… END_OF_DOCUMENT_TOKEN_TO_BE_REPLACED