Launch of Robert Stephenson’s book “We are Building Capitalism!” 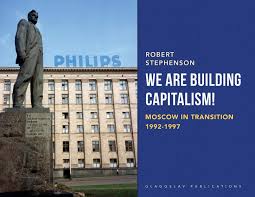 Please join us at Clementi House at 18.00 on Saturday 2 November 2019 for the presentation and launch of Robert Stephenson’s fascinating new book about Moscow in the years immediately following the collapse of the USSR.
Described by one reviewer as “modern pictorial cultural history at its best”, the book provides a unique view of daily life in Russia’s capital city during the turbulent early years of transition to market capitalism. Through his own original photographs and supporting narrative, the author shows how the old Soviet capital and its inhabitants went through a period of epochal change as Russia opened its doors wide to new influences, ideas and possibilities. Reviewing the book in East-West Review, Martin McCauley wrote: “Anyone who lived in Moscow during those years will enjoy this compendium. It will bring back many memories of the huge changes that hit the Russian capital and, indeed, disoriented many locals.”
Robert Stephenson is a photographer and a former UK senior civil servant with over 35 years of experience working in public administration, including 20 years in international development. He began his international career in March 1992 in Moscow, where he lived and worked for five years before going on to lead a UK government team dedicated to supporting civil service reform around the world.
The evening will include a presentation by the author, with an audience Q&A followed by a short reception. Copies of the book will be available for sale and signature.
More information about the book is available on the Glagoslav Publications website at:
https://glagoslav.com/shop/we-are-building-capitalism-moscow-in-transition-1992-1997/

Translator and publisher’s journey to the time of Revolution, a wonderful author’s reading of Boris from his new books! Stories and Poems from the Russian Revolution ‘One of the real gems among the centenary books… Boris Dralyuk assembles a potent blend of novelty, utopianism and eschatology’ — Spectator ‘Broad and erudite collection’ — Financial Times ‘Dralyuk has assembled a high-pressure book of crisis writings by authors caught strutting as actors on the world stage’ –Times Liter… END_OF_DOCUMENT_TOKEN_TO_BE_REPLACED

Alexei Gherman’s first two solo features, 1971’s Trial on the Road and 1976’s Twenty Days Without War, both remarkable, unorthodox, and decidedly anti-heroic war films, met with official disapproval and censorship. The former was still banned (and would remain so for another decade) when Gherman embarked on the latter. A subtle, intimate, and affecting drama, Twenty Days Without War was denounced as “the shame of Lenfim” (it was made for Lenfilm Studios) and, for a time, itself suppres… END_OF_DOCUMENT_TOKEN_TO_BE_REPLACED

Published in more than thirty languages, Fiona Sampson has twenty-one volumes of poetry, criticism and philosophy of language.  She works as an editor and critic. She is Professor of Poetry at the University of Roehampton, where she also edits the international quarterly Poem. Our club is proud to have Fiona as our patron. In her lecture Fiona address important questions such as: is poetry ever useful? Can it be therapeutic? Is it only relevant to individuals from some communities and not ot… END_OF_DOCUMENT_TOKEN_TO_BE_REPLACED