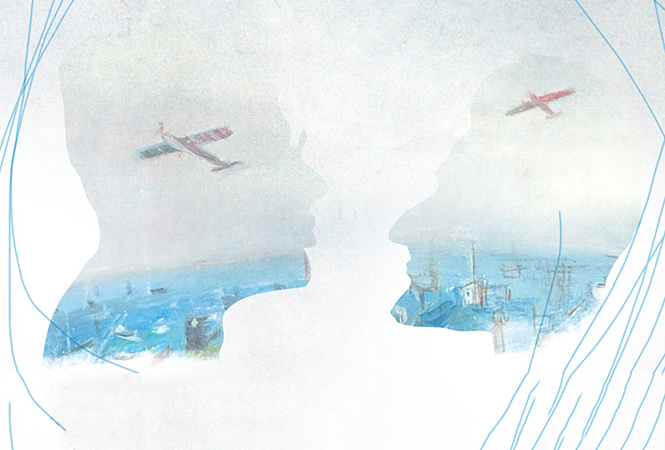 Documentary animation film “ILFANDPETROV”, is about the legendary Soviet satirist duo Ilya Ilf and Evgeny Petrov, whose novels about con man Ostap Bender in The Twelve Chairs (1928) and The Little Golden Calf (1931) – are amongst the most beloved and frequently quoted works in Russian literature. In this film creators repeated the route of the book “One stored America” (as Little Golden America) and also visited Odessa, Moscow, Yaroslavl, Paris, added their film with revived paintings of the 1920s and 1930s, used archival footage, documents and original music of the first third of the XX century and family archives. Ilf and Petrov were voiced by two legendary Russian artists Sergei Makovetsky (Ilf) and Igor Zolotovitsky (Petrov).

Roman Liberov is a filmmaker , scriptwriter. He was born in Vilnius. Roman graduated from the faculty of nonfiction film of the Gerasimov Institute of Cinematography. He trained on the BBC channel, collaborated with Russian and foreign TV-channels as a scriptwriter, director and producer. He is working on the cycle of “writer’s films,” of which he’s already finished: “Yury Olesha called “the writer,”” “Conversation with the celestial” (to the jubilee of Joseph Brodsky), “One day of Zhora Vladimav,” “Written by Sergey Dovlatov,” “ILF&PETROV,” “Save my speech forever” (about Osip Mandelstam). The finalist of TEFI 2010, the participant of the best nonfiction TV-film program 2010 of the festivals “Lavr” and “Artdocfest.”

The film will be in Russian with English subtitles.

The screening will be followed by a short Q&A with the director Roma Liberov.

Alexei Gherman’s first two solo features, 1971’s Trial on the Road and 1976’s Twenty Days Without War, both remarkable, unorthodox, and decidedly anti-heroic war films, met with official disapproval and censorship. The former was still banned (and would remain so for another decade) when Gherman embarked on the latter. A subtle, intimate, and affecting drama, Twenty Days Without War was denounced as “the shame of Lenfim” (it was made for Lenfilm Studios) and, for a time, itself suppres… END_OF_DOCUMENT_TOKEN_TO_BE_REPLACED