I Loved You All: About Russian Poet Boris Ryzhy 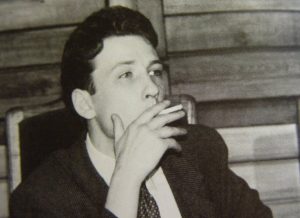 The name Boris Ryzhy (1974-2001) came to light at the break of the century – just a few months before his untimely death. He was referred to as “the most talented poet of the generation”, while his poems, written in the 1990s, have affected the Russian contemporary literature in the most profound ways. Ryzhy, who took his own life when he was just 26 years old, has played a pivotal role in Russian poetry by talking about ordinary people through the prism of timeless values in a clear and approachable language, like Pushkin. He was compared with other famous Russian poets, Mikhail Lermontov, and the young Joseph Brodsky, however Ryzhy is a distinctly original writer with his own voice and range of subjects. In 2000, he received an Anti-Booker – a major Russian literary award.

The Russian poet Boris Ryzhy was handsome, gifted, and achieved considerable literary fame. So why did he take his own life at the age of 26? A quest to find the answer takes the filmmaker to the criminal neighbourhood in the cold industrial city of Yekaterinburg where Boris grew up. Through conversations with neighbours, family, and friends, she pieces together a picture of the passionate and complex life of the poet. What emerges is a penetrating portrait of the Perestroika generation, who lost all certainties, becoming a generation of criminals and bodyguards. Despite it all, Ryzhy loved this unhappy world, populated half by prisoners and half by their guards. He tried to transform its ugliness into the philosopher’s gold of poetic prosody.

The Dutch/Russian director Aliona van der Horst has made five internationally awarded documentaries. She studied Russian literature at Amsterdam University and Directing at the Dutch Film Academy. She began her career in 1997 with the much-acclaimed documentary ‘The Lady with the White Hat’ and since then has received multiple awards for her films: ‘After The Spring of ’68’ (2001), ‘The Hermitage Dwellers’ (2004), ‘Voices of Bam’ (2006), ‘Boris Ryzhy’ (2008) and ‘Water Children’ (2011). She just finished her new film ‘Love is Potatoes’, about her peasant Russian family, premiering at the international competition at the Leipzig Int. Filmfestival.

Oleg Dozmorov is a Russian writer, poet and critic. He was born in Yekaterinburg, Russia in 1974. He is the author of several collections of poetry including “Vosmistishiya”, a 2004 collection of octaves, and “Take a look at the hippopotamus” (2012), which was awarded “The Russian Prize” and “The Moscow Count” literary prizes. His poems are translated into Italian, English, Dutch and Ukrainian. His International Retreat for Writers fellowship at Hawthornden Castle resulted in a semi-fictional story Premiya “Mramor” (which can be loosely translated into English as Marble Award). It was published by Znamia in 2006. Many of Dosmorov`s poems are dedicated to his friend Boris Ryzhy. Since 2009 he lives in London.

Our guest from Canada, poet Vera Pavlova, is a classically trained pianist “in her first life”. A unique combination of Vera’s poetry and Tchaikovsky’s music, played by her. “As Vera Pavlova speaks, she uproots the traditional meanings and turns of speech, pronouncing each word with delight, but also with an effort, as if for the first time, carefully listening to the sound and feeling anew her native speech with her tongue…” Aleksandr Arkhangelskiy, “Vremia MN”… END_OF_DOCUMENT_TOKEN_TO_BE_REPLACED