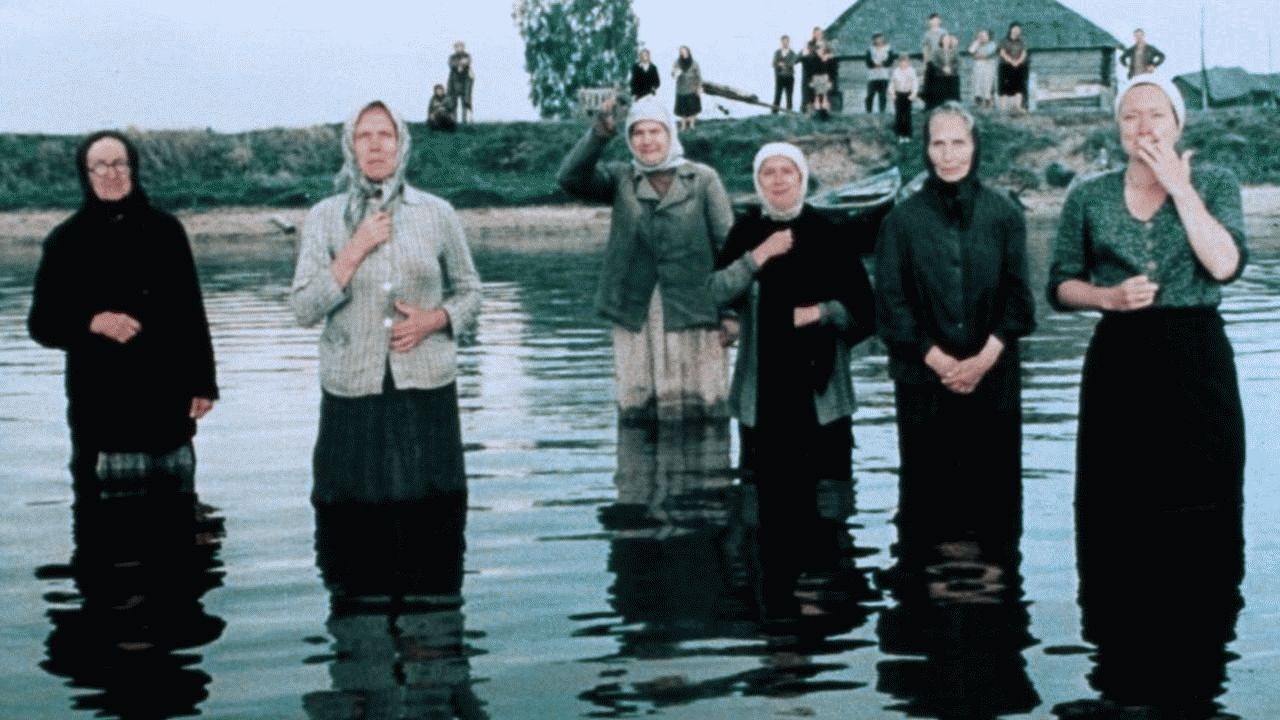 As the white-raincoated officials from the mainland emerge from the mist we get the feeling of the doom that is to overtake the little island of Matyora and its people. It is to be flooded to become part of a vast Siberian hydro-electric project. We switch immediately to the people of the island and their way of life, which is depicted with great understanding of their essentially happy existence rooted in a love of nature and of traditions which go back to pagan origins. In a film with such tragic implications there is, however, much gaiety which makes more poignant the inevitable ending. The island is sacrificed to progress. Engineers come and go. Arrangements are made for the evacuation which must take place. There are those, however, who prefer to remain in their homes and face death in the shadow of their ancestors.

Klimov made the film in 1981, having taken it over from his wife Larissa Shepitko who was killed in a car accident. She had also written the script in collaboration with Klimov’s brother Herman. It was based on a novel by the Siberian writer Valentin Rasputin. As with so many of Klimov’s films it did not meet with official approval and was shelved for many years until his spectacular assignment to the powerful position of head of Soviet cinema under the glasnost policies of Gorbachov. Originally chosen to open the 1984 Berlin Film Festival, it was initially refused an export licence.

See what people say about it:
https://mubi.com/films/farewell-1983/ratings

Published in more than thirty languages, Fiona Sampson has twenty-one volumes of poetry, criticism and philosophy of language.  She works as an editor and critic. She is Professor of Poetry at the University of Roehampton, where she also edits the international quarterly Poem. Our club is proud to have Fiona as our patron. In her lecture Fiona address important questions such as: is poetry ever useful? Can it be therapeutic? Is it only relevant to individuals from some communities and not ot… END_OF_DOCUMENT_TOKEN_TO_BE_REPLACED

Alexei Gherman’s first two solo features, 1971’s Trial on the Road and 1976’s Twenty Days Without War, both remarkable, unorthodox, and decidedly anti-heroic war films, met with official disapproval and censorship. The former was still banned (and would remain so for another decade) when Gherman embarked on the latter. A subtle, intimate, and affecting drama, Twenty Days Without War was denounced as “the shame of Lenfim” (it was made for Lenfilm Studios) and, for a time, itself suppres… END_OF_DOCUMENT_TOKEN_TO_BE_REPLACED

Our guest from Canada, poet Vera Pavlova, is a classically trained pianist “in her first life”. A unique combination of Vera’s poetry and Tchaikovsky’s music, played by her. “As Vera Pavlova speaks, she uproots the traditional meanings and turns of speech, pronouncing each word with delight, but also with an effort, as if for the first time, carefully listening to the sound and feeling anew her native speech with her tongue…” Aleksandr Arkhangelskiy, “Vremia MN”… END_OF_DOCUMENT_TOKEN_TO_BE_REPLACED