Diary of a Madman by Nikolai Gogol 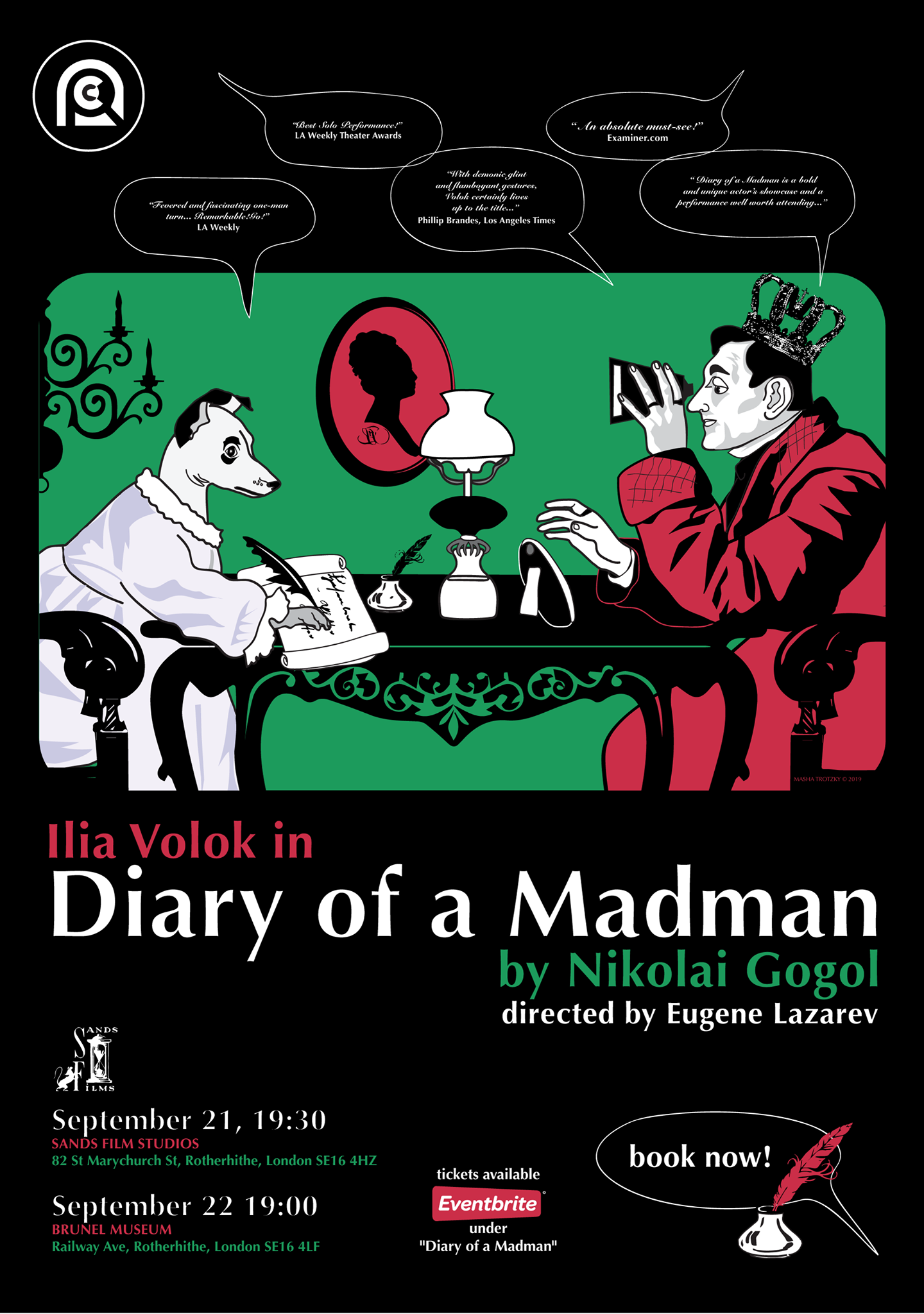 “An absolute must-see, with a performance by Volok that is so riveting that as his insanity escalates, he maintains a powerful core that never dissipates!” -Examiner

“DIARY OF A MADMAN is a story that people all over the world can relate to. “ Broadway World

In September there will be a rare opportunity for London theatre-goers to see a staged production of Nikolai Gogol’s classic 1835 story “Diary of a Madman” in English. Performed by the charismatic veteran actor and polymath Ilia Volok, this one-man show has already been attracting a lot of interest in US, France, Ukraine.

“Diary of a Madman” centers on the life of Poprishchin,
a low-ranking civil servant who yearns to be noticed by a beautiful woman, the daughter of a senior official,with whom he has fallen in love.

​His diary records his gradual, mesmeric slide into insanity.
The story portrays the average man’s satirical quest for individuality in a seemingly indifferent, urban city.

It sounds grim and heavy-going but in fact is a gentle comic exercise in pure whimsy. Alice’s adventures in a Russian wonderland, where dogs maintain a frisky correspondence through letters and the earth is in danger of sitting on the moon.
“April 43rd, year 2000.
People think the human brain is in the head. Not at all! It is carried by the wind from the Caspian Sea.”

Performer Ilya Volok has toured the US extensively with his one-man show and received much critical acclaim including the LA Weekly Theater (have to use the American spelling here!) Award for Best Solo Performance.

Born in Kiev in the Soviet Ukrainian Republic, he went on to appear in a total of 150 films and TV programmes, including blockbusters such as “Indiana Jones and the KIngdom of the Crystal Skull” and “Mission Impossible – Ghost Protocol” but he first achieved success in a very different field as a professional athlete, gaining 3rd place in the World Rowing Championships in Italy. Then he decided to switch from sport to acting and he managed to beat 200 other applicants to win a place at the prestigious Moscow Art Theatre School.
After graduating he was invited to work with several top theatre companies but he decided to pursue his Hollywood dreams and with only 300 dollars in his pocket and despite no knowledge of English, he took the plunge and headed west.
At first it was tough and he spent time working in a restaurant before several years as a funeral service attendant working at a cemetery.
Finally he got his acting break in the film “Hail Caesar” playing opposite Samuel Jackson and Robert Downey Jr.
Once established in the film world he returned to his first love, theatre. He has multiple recent theatre credits in the US and is a Lifetime Member of the Actors Studio.
Now he is finally bringing “Diary of a Madman” to London, confident that it will replicate the success it enjoyed in the US.
Nikolai Gogol’s focus on such modern themes as urban angst, identity crises and psychic dislocation – and his radically surreal style all make him absolutely relevant in the 21st century. As a writer Gogol belongs in the age of Google rather than be unjustly consigned to mid 19th century obscurity.

A thrilling lecture not just about Dorothy Saier’s novel, but about female education in Oxford — where the events of “Gaudy Night” take place. Dr. Alexandra Borisenko talks about the role of women in Oxford University in 19th century, as well as her experience of researching the environment of the novel and translating it into Russian, including the need to plunge into the university life of the last century and to deal with hundreds of quotes,  from the Bible to popular poetry, that “Gaudy N… END_OF_DOCUMENT_TOKEN_TO_BE_REPLACED

Alexei Gherman’s first two solo features, 1971’s Trial on the Road and 1976’s Twenty Days Without War, both remarkable, unorthodox, and decidedly anti-heroic war films, met with official disapproval and censorship. The former was still banned (and would remain so for another decade) when Gherman embarked on the latter. A subtle, intimate, and affecting drama, Twenty Days Without War was denounced as “the shame of Lenfim” (it was made for Lenfilm Studios) and, for a time, itself suppres… END_OF_DOCUMENT_TOKEN_TO_BE_REPLACED