Culture Tree: Moscow’s Zaryadye Park and Architecture in the Age of Putin 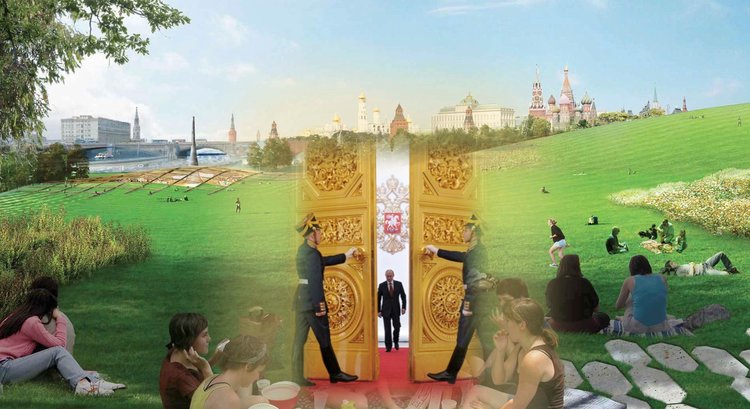 Vladimir Paperny will discuss the new project for Zaryadye Park in Moscow, based on his interviews with architects Elizabeth Diller and Charles Renfro, and will evaluate the park’s role in the political and aesthetic landscape of post-1991 Moscow under Mayors Yuri Luzhkov and Sergey Sobyanin (and Presidents Boris Yeltsin, Dmitry Medvedev and Vladimir Putin). The title of his talk, Culture Tree, is a pun on landscape urbanism and on the titles of Paperny’s books Culture Two and Culture Three. Vladimir Paperny is the leading historian and theorist of 20th and 21st century Russian architecture. He received his MA in design from the Stroganov Art Academy in Moscow, and his PhD in Cultural Studies from the Russian State University for the Humanities. His PhD thesis Architecture in the age of Stalin. Culture Two was published in Russian (Moscow, 1996, 2006), in English (Cambridge University Press, 2003, 2011) and in Czech (Arbor Vitae, 2014). Since moving to the US in 1981, Dr. Paperny was visiting professor at USC, UCLA, Woodrow Wilson Center, and Bristol University, UK. He worked as Marketing Manager (US Gypsum, Lavi Industries) and as Art Director (Orange Coast Magazine, The Workbook). He continues working at his design studio in Los Angeles. His articles, essays and columns (in both English and Russian) appear in such publications as Snob, Architectural Digest, Project Russia, Speech and many others. His collections of essays include Mos Angleles, Mos Angeles-2 (NLO, 2004, 2009) and Fuck Context? (TATLIN, 2011).

This talk is part of a series called MOSCOW MAKEOVER: Architecture and Power in Putin’s Russia. The lectures are diverse, provocative and frank in character, and the theme of each is inter-related. On 11th May Yuri Luhzkov, the controversial Mayor of Moscow between 1992-2010 and one of Russia’s best-known political figures will be speaking at Pushkin House, followed by Charles Renfro, partner of architectural practice Dillier, Scofidio and Renfro on the 19th May. Renfro is the lead design of the high-profile Zaryadye Park project in the shadow of Moscow’s Kremlin.  In Russian and English.

The lecture series is organized and chaired by Michał Murawski, Leverhulme Early Career Fellow at Queen Mary, University of London; and Clementine Cecil, Director of Pushkin House. Supported by the Department of Russian, Queen Mary; Pushkin House; and the Leverhulme Trust.

Published in more than thirty languages, Fiona Sampson has twenty-one volumes of poetry, criticism and philosophy of language.  She works as an editor and critic. She is Professor of Poetry at the University of Roehampton, where she also edits the international quarterly Poem. Our club is proud to have Fiona as our patron. In her lecture Fiona address important questions such as: is poetry ever useful? Can it be therapeutic? Is it only relevant to individuals from some communities and not ot… END_OF_DOCUMENT_TOKEN_TO_BE_REPLACED

Alexei Gherman’s first two solo features, 1971’s Trial on the Road and 1976’s Twenty Days Without War, both remarkable, unorthodox, and decidedly anti-heroic war films, met with official disapproval and censorship. The former was still banned (and would remain so for another decade) when Gherman embarked on the latter. A subtle, intimate, and affecting drama, Twenty Days Without War was denounced as “the shame of Lenfim” (it was made for Lenfilm Studios) and, for a time, itself suppres… END_OF_DOCUMENT_TOKEN_TO_BE_REPLACED

Our guest from Canada, poet Vera Pavlova, is a classically trained pianist “in her first life”. A unique combination of Vera’s poetry and Tchaikovsky’s music, played by her. “As Vera Pavlova speaks, she uproots the traditional meanings and turns of speech, pronouncing each word with delight, but also with an effort, as if for the first time, carefully listening to the sound and feeling anew her native speech with her tongue…” Aleksandr Arkhangelskiy, “Vremia MN”… END_OF_DOCUMENT_TOKEN_TO_BE_REPLACED