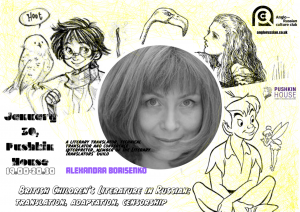 We’ll talk about the popularity of British children’s literature in Russia in the Soviet and post-Soviet era; about the concept of childhood and readers’ expectations; about loose adaptations coexisting with full and faithful translations; about the methods of censorship in Soviet times and today. We will also look at how Alice, Peter Pan and Harry Potter are reflected by this multi-facet mirror.

Since 1997, she has been teaching jointly with Dr. Victor Sonkin a workshop on literary translation in the Department of Philology at MSU. The workshop has published several books translated by her students, including two major anthologies of British and American crime fiction (2009, 2011). She teaches courses on translation studies, children’s literature, crime fiction, cultural studies.

Borisenko has published numerous critical and theoretical works on literary history and literary translation. Apart from her educational work, she is a literary translator, technical translator and conference interpreter, member of The Literary Translators’ Guild.

This is an ARCC event and all are welcome.

Alexei Gherman’s first two solo features, 1971’s Trial on the Road and 1976’s Twenty Days Without War, both remarkable, unorthodox, and decidedly anti-heroic war films, met with official disapproval and censorship. The former was still banned (and would remain so for another decade) when Gherman embarked on the latter. A subtle, intimate, and affecting drama, Twenty Days Without War was denounced as “the shame of Lenfim” (it was made for Lenfilm Studios) and, for a time, itself suppres… END_OF_DOCUMENT_TOKEN_TO_BE_REPLACED