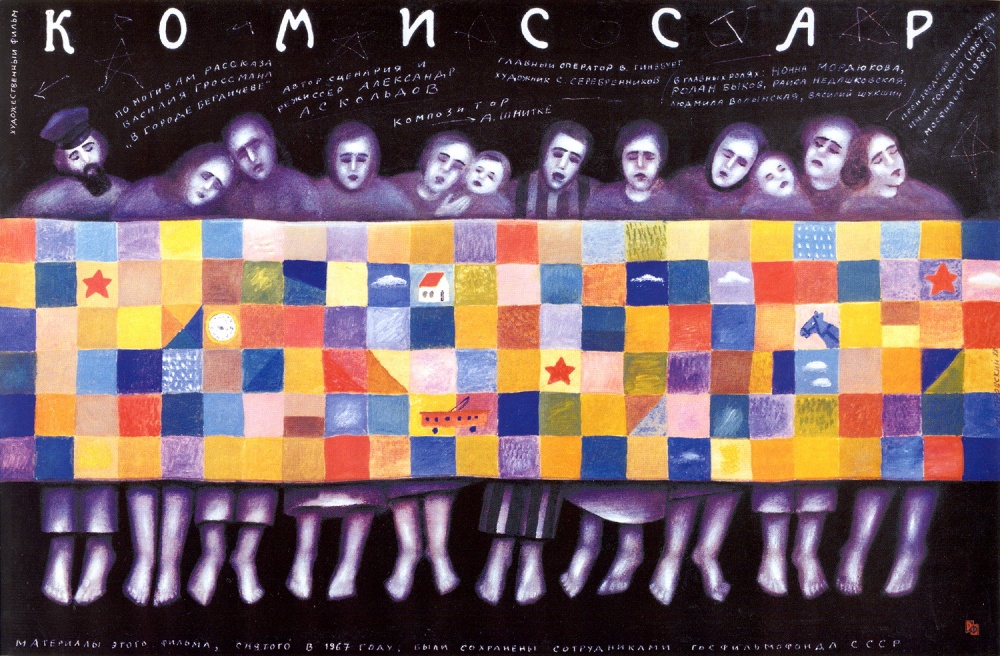 A work of considerable artistic merit, Aleksandr Askoldov’s Commissar (Комиссар) is nonetheless most famous on other than artistic grounds. Based on the story “In the Town of Berdichev” by Ukrainian Jewish author Vasili Grossman, it is writer-director Askoldov’s only film.

Made in 1967, it was suppressed by the Soviet government for over twenty years, appearing at home and in worldwide distribution, after finally being completed, only when glasnost had liberalized the nation and national prerogatives—and even then only because Askoldov indefatigably pursued its release. (It took a Silver Bear and the prize of international film critics at Berlin in 1988, and Askoldov also won at Flanders.)

Introduction and post-screening discussion by our cherished duo Natasha (in Russian) and Lyudmila (in English.)

The film, in part about an impoverished Jewish family in 1922 during the Russian Civil War, takes aim at anti-Semitism. The Soviet Union had sided with Arabs in the 1967 Arab-Israeli War. This is the preemptive “Six-Day War” that Israel fought against Egypt, which was joined by Iraq, Jordan and Syria. It was an especially active time for anti-Jewish sentiment in the U.S.S.R.—a sentiment that ran, and runs, deep among Russians as a result of Russia’s historically dominant Orthodox Christianity. The film was thus deemed unfit for the commemorative event for which it had been green-lighted: the fifty-year anniversary of the 1917 Bolshevik Revolution.

Cultural collision is at the heart of Commissar. Klavdia Vavilova is a Red Army cavalry commissar who is stationed in a small town. When a military dalliance results in her pregnancy and abandonment, she is placed—that is, strategically hidden away—in the cottage of Yefim Mahazannik (Rolan Bykov, best actor Nika), a Jewish tailor and mender of pots and pans, his wife Mariya (Raisa Nedashkovskaya, best supporting actress Nika) and their six children. The Mahazanniks’s bedroom has been officially appropriated for Klavdia’s use. However, it is the close-quartered interactions between the formidable Klavdia and this warm, somewhat stereotypical Jewish family that weighs in on her, helping to move her to higher human ground.

– Excerpt from a review by Dennis Grunes

Published in more than thirty languages, Fiona Sampson has twenty-one volumes of poetry, criticism and philosophy of language.  She works as an editor and critic. She is Professor of Poetry at the University of Roehampton, where she also edits the international quarterly Poem. Our club is proud to have Fiona as our patron. In her lecture Fiona address important questions such as: is poetry ever useful? Can it be therapeutic? Is it only relevant to individuals from some communities and not ot… END_OF_DOCUMENT_TOKEN_TO_BE_REPLACED