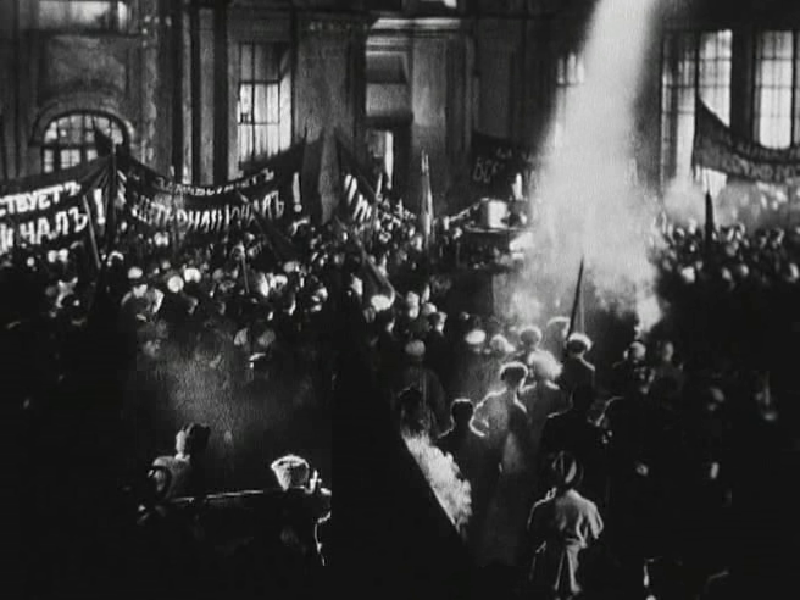 Ten Days That Shook the World

October was one of two films commissioned by the Soviet government to honour the tenth anniversary of the October Revolution (the other was Vsevolod Pudovkin’s The End of St. Petersburg). Eisenstein was chosen to head the project due to the international success he had achieved with The Battleship Potemkin in 1925. Nikolai Podvoisky, one of the troika who led the storming of the Winter Palace, was responsible for the commission.

The scene of the storming was based more on The Storming of the Winter Palace from 1920, a re-enactment involving Vladimir Lenin and thousands of Red Guards, witnessed by 100,000 spectators, than the original occasion, which was far less photogenic. This scene is notable because it became the legitimate, historical depiction of the storming of the Winter Palace owing to the lack of print or film documenting the actual event, which led historians and filmmakers to use Eisenstein’s recreation. This illustrates October’s success as a propaganda film.

The film opens with the elation after the February Revolution and the establishment of the Provisional Government, depicting the throwing down of the Tsar’s monument. It moves quickly to point out it’s the “Same old story” of war and hunger under the new Provisional Government, however. The buildup to the October Revolution is dramatized with intertitles marking the dates of events.

The Bolshevik Committee votes to approve Lenin’s proposal to revolt.

Lenin returns to the Smolny after four months in hiding and takes control of the uprising on the eve of the 25th. A message is sent to the people declaring the Provisional Government is deposed as of October 25 at 10 AM.

The cruiser Aurora sails in as the workers take control of the bridges. The Minister of War calls troops to the aid of the deposed government, and Cossacks and the Women’s Death Battalion arrive at the Winter Palace and lounge on the Tsar’s billiard table. The Provisional Government drafts an appeal to the citizens attempting to reassert its legitimacy, but that evening a congress is held including delegates from all parts of the country and the Soviets are voted into power…

Translator and publisher’s journey to the time of Revolution, a wonderful author’s reading of Boris from his new books! Stories and Poems from the Russian Revolution ‘One of the real gems among the centenary books… Boris Dralyuk assembles a potent blend of novelty, utopianism and eschatology’ — Spectator ‘Broad and erudite collection’ — Financial Times ‘Dralyuk has assembled a high-pressure book of crisis writings by authors caught strutting as actors on the world stage’ –Times Liter… END_OF_DOCUMENT_TOKEN_TO_BE_REPLACED