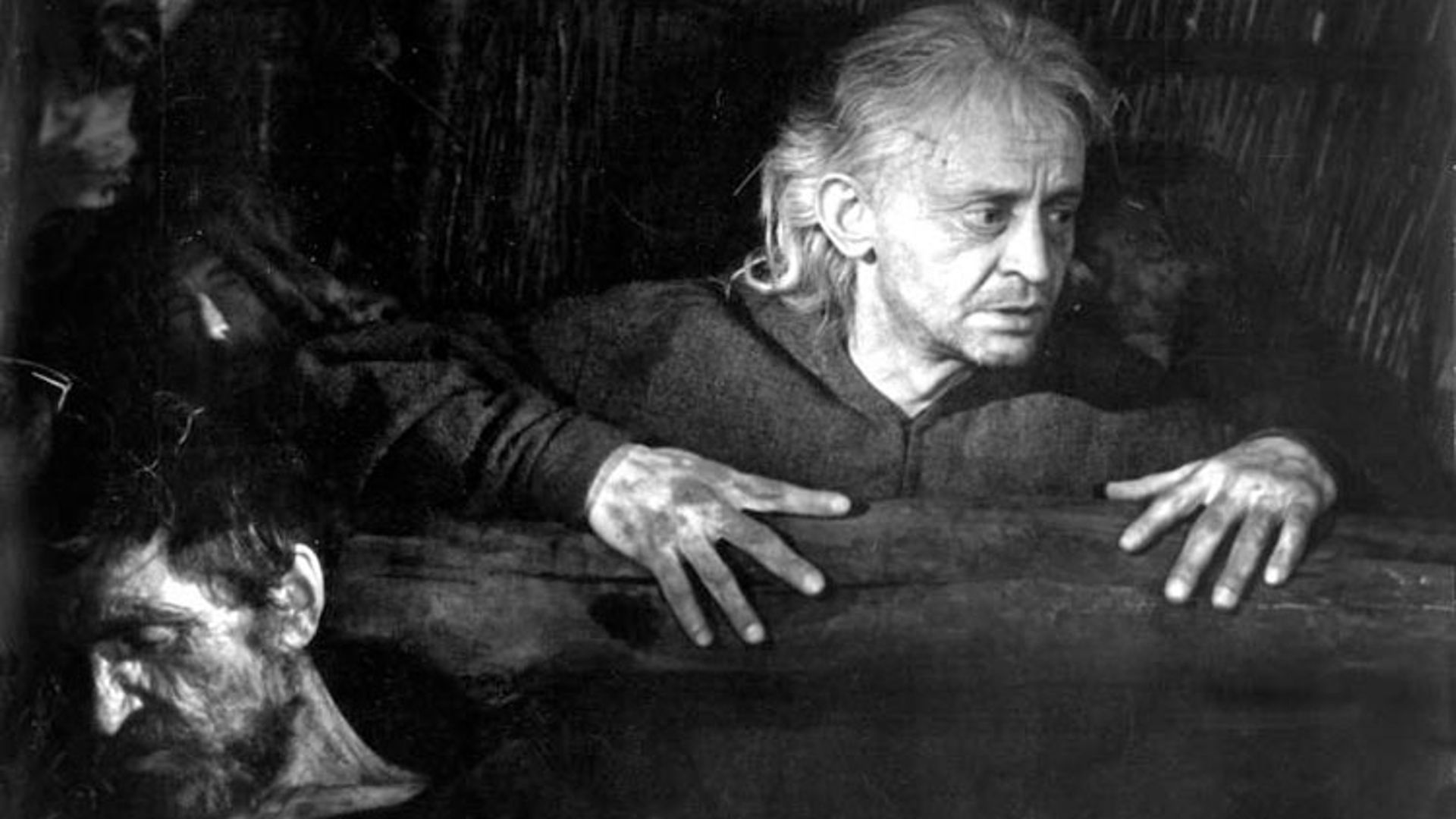 The tale of an ageing monarch descending into madness, filtered through a Communist perspective by Russian director Grigori Kozintsev in the latter’s final film.

This monochrome King Lear has an epic sweep, which emphasizes the catastrophic impact of feudal misrule upon the country’s starving masses. A commanding title performance by Estonian actor Yuri Yarvet, some striking landscape imagery, and Dmitri Shostakovich’s anguished score help make for a spirited adaptation.

Kozintsev recalls in his diary of the making of the film:

‘ In Shostakovich’s music I can hear a ferocious hatred of cruelty, the cult of power and the oppression of justice…a fearless goodness which has a threatening quality.’
‘I was full of admiration for Jarvet’s way of walking. He moved forward with a sort of clumsy ceremony, with grandiose steps…Jarvet has a sinewy, wiry body, with enormous peasant’s hands. He is just like everyone else, and first among other men.’

‘I remember in your Hamlet and in your King Lear, your searching for truths about man’s condition and your wish to speak through your art about one subject only: about humanity – no more, no less.’

Celebrating the 400th birthday of Shakespeare, we find his work as pertinent and globally acclaimed as ever.

Our presenter for this evening is Natasha Rubinstein,
translation is provided by Ludmila Razumova.

Natalia Rubinstein is a freelance journalist and literary critic. She was born in Leningrad and got her degree there. She then taught Russian language and literature and worked in Pushkin’s memorial museum at the Moika embankment, 12. After she left the Soviet Union (1974) she was editor of and contributor to numerous émigré publications in Israel, France, Germany, UK. She has been a BBC Russian Service producer for over 20 years.

This event is FREE.

15 seats available at the front for non-Russian speakers, where the subtitles are best visible. Please email office@pushkinhouse.org.uk to reserve

Alexei Gherman’s first two solo features, 1971’s Trial on the Road and 1976’s Twenty Days Without War, both remarkable, unorthodox, and decidedly anti-heroic war films, met with official disapproval and censorship. The former was still banned (and would remain so for another decade) when Gherman embarked on the latter. A subtle, intimate, and affecting drama, Twenty Days Without War was denounced as “the shame of Lenfim” (it was made for Lenfilm Studios) and, for a time, itself suppres… END_OF_DOCUMENT_TOKEN_TO_BE_REPLACED

A laureate of the prestigious Andrei Bely Prize, Rubinstein is an accomplished poet with a sharp eye for unusual detail. His innovative use of ‘found poetry’ and ‘poems on index cards’ were refreshing and unique in the surge of ‘new literature’ after the fall of Communism. He is also a keen essayist; his columns for publications such as Itogi, Esquire and grani.ru are extremely popular and his book of collected essays Zeitgeists, has earned well-deserved praise from critics and readers alike. … END_OF_DOCUMENT_TOKEN_TO_BE_REPLACED