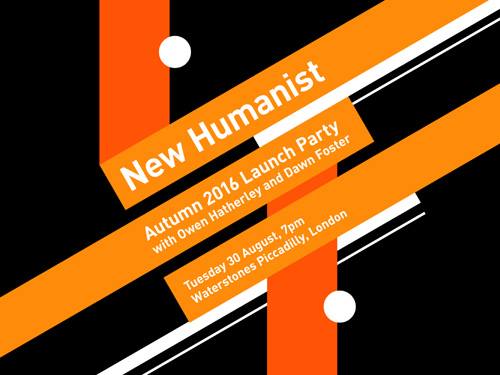 Join our contributors Owen Hatherley and Dawn Foster in conversation to mark the launch of the Autumn 2016 New Humanist.

The Chernobyl accident of 1986 is one of the greatest catastrophes of the nuclear age, yet its aftermath was followed by a wave of local solidarity and international co-operation. Does it take a disaster to get people to help one another? Should such an event make us think again about the potential of new technology?

Visit this invitation on the New Humanist blog here.

a writer on issues as diverse as can be connected pop culture and policies of place making, journalist in the intricacies of urban architecture and citizen of many places he finds interesting – across time and without borders. He has a strong background in places of Soviet nostalgia and well travelled in its remains, he is sure to present an involving view in the face of this event, and what it entails for our common future. Joining the New Humanist launch party to talk about Chernobyl etc, his voices is not to be missed.

is a writer on politics, social affairs and economics for The Guardian, London Review of Books, Independent and Times Literary Supplement, and is a regular political commentator for Sky News, Channel 4 News, and BBC Newsnight. Her first book, Lean Out, is on feminism, austerity and corporate culture.

Tickets are £5, redeemable against one of the authors’ books, and include a free glass of wine plus a copy of the latest New Humanist.

To purchase your ticket please email piccadilly@waterstones.com or telephone 020 7851 2400.

Translator and publisher’s journey to the time of Revolution, a wonderful author’s reading of Boris from his new books! Stories and Poems from the Russian Revolution ‘One of the real gems among the centenary books… Boris Dralyuk assembles a potent blend of novelty, utopianism and eschatology’ — Spectator ‘Broad and erudite collection’ — Financial Times ‘Dralyuk has assembled a high-pressure book of crisis writings by authors caught strutting as actors on the world stage’ –Times Liter… END_OF_DOCUMENT_TOKEN_TO_BE_REPLACED